Christians in many nations and denominations are focused on the Christmas season at this time. While there are many customs and practices regarding Christmas (including its December 25th date) that have secular or pre-Christian origins (as any informed scholar knows), there are biblical themes and content which are associated with this season. One of the enduring biblical narratives about the birth of Jesus Christ is the coming of the “Wise Men from the east” to worship the Christ-Child. This narrative is contained in Matthew 2, and it includes many facts which are only hinted at in the biblical text. There was a great empire to the east of the Roman Empire which then controlled Judea where Jesus was born. That great empire was Parthia, and its nobility included an elite class called “the Wise Men.” The Wise Men who visited Jesus when he was a “young child” (Matthew 2:9) were Parthian nobility and /or priests (who were called the “Magi)”.

Few Christians realize how powerful these Wise Men/Magi really were in the geopolitical circumstances into which Jesus was born. These Parthian Wise Men/Magi were from the Parthian governing body which selected Parthian Emperors–who had to be from one royal seed and that seed alone. One of their duties was to keep track of all the male members of the royal house of Parthia that they could locate. Secular history relates that at the time their visit to Judea took place, the Wise Men were searching vigorously to find male heirs to the throne of Parthia’s empire as a wicked emperor of Parthia had done his best to kill all his potential rivals of any age that he could find to eliminate any “competition.” He killed so many that the Wise Men had to journey outside Parthia’s empire to locate new male members of the royal seed (who would automatically be possible heirs to the Parthian throne as Parthia had no rule of primogeniture). It is when Jesus was very young that the Wise Men/Magi came to Judea seeking a male member of the same lineage as the Parthian emperors. They were thrilled to find one. They informed Herod that they were in Jerusalem to seek a male who had  been “born…a king of the Jews.” In other words, they were diligently looking for male members of Judah’s royal dynastic line as they were related to the Parthian emperors! It was the child Jesus who was the male heir to the Parthian throne that they had been led to by the “star” that brought them to Jerusalem from an eastern point of origin. Jesus could be that heir because he was of the royal seed of the Jews who had descended from King David and all the kings of Judah that are described in the Bible. The Parthian emperors and royalty were also all descended from the royal seed of King David who had been elevated during the empire of Babylon to renewed royal status in Mesopotamia/Asia after long captivity of King Jehoiachin (II Kings 25:27-30). Centuries later, his offspring became rulers over the exiled descendants of the ten tribes of Israel who later included the Parthians. The Wise Men/Magi were especially thrilled to find Jesus because his father and mother were both from the very royal seed they were seeking!

Why was “all Jerusalem” afraid when the Wise Men arrived with their caravan and escorts in Jerusalem (Matthew 2:3)? What can we know about the “star” that led them to the Christ-Child (Matthew 2:7-11)? How many Wise Men came to visit Jesus? (the Bible doesn’t limit their delegation to just three members). These questions can be answered when we combine the biblical narratives pertaining to this event with what we know of the Wise Men/Parthians from secular history. Suffice it to say that there is a lot more happening in the visit of the Wise Men to Jerusalem than is apparent at first glance.

Below I have reproduced a post on this topic which I placed at this blog in December 2017. New readers of my blog will likely not have seen this important information. Be sure to click on the link which is just below that post’s text. It will open to a lengthy part of the pertinent texts about Jesus Christ’s life and the visit of the Parthian Wise Men that are found in my printed book, Parthia–The Forgotten Ancient Superpower and my E-book, The “Lost ” Ten Tribes of Israel…Found! Both books can be obtained at the home page of my website if you would like to see the wealth of information that is available from historical sources about the Parthians.

The Christ-Child and the Three Wise Men 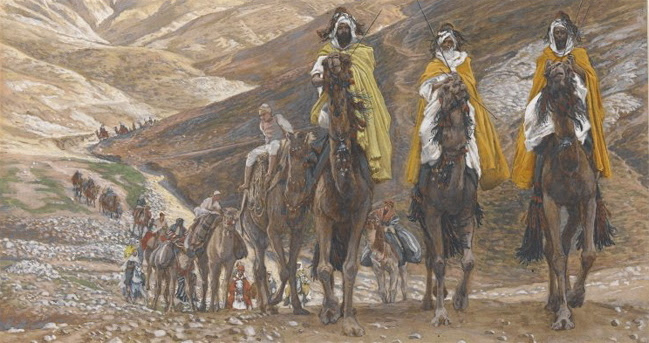 At this time of year, much of Christendom is celebrating Christmas, and one of the enduring themes about the birth of Jesus Christ is the visit of the Three Wise Men (or “Magi”) to the very young Christ-child. The usual image of this event are depictions of three kings atop treasure-laden camels traveling all alone in their royal regalia and coming over a hill near Jerusalem as they follow a huge star in the sky. While this image has inspired many for centuries, it is an unrealistic depiction from any historical perspective. Royalty (or commoners for that matter) did not travel alone in ancient times on trade routes due to the ever-present danger of robbers and robber barons with private armies waiting to prey on passing travelers and caravans. People typically traveled in large caravans for mutual protection. The Parthian Wise Men would have traveled, as did all royalty and nobility, with a huge entourage of armed escorts, body-servants, cooks, animal-handlers, etc. My books, Parthia–The Forgotten Ancient Superpower and my E-book, The “Lost” Ten Tribes of Israel…Found!, both examine how the “Three Wise Men” would have actually traveled in ancient times.

Also, the Bible does not limit the number of Wise Men/Magi to only three persons. How many Wise Men might there really have been? The biblical account in Matthew 2 of the Wise Men’s arrival in Jerusalem, their meeting with King Herod and their eventual coming into the presence of the “young child” Jesus (verse 11) has very interesting inferences of what was really happening during their visit to Jerusalem that is easily missed if one does not know the “back-story” of events involving the two ancient superpower empires of that time: Rome and Parthia. Herod represented Rome while the Wise Men and their entire entourage represented Parthia. These empires often were at war with each other, but the Wise Men arrived at a time of delicate peace between the two empires. Why does Matthew 2:3

report that King Herod and the entire city of Jerusalem was so troubled by the arrival of the Wise Men? The arrival of three people from the far east would not have created even a ripple in the fabric or awareness of the people of Jerusalem as they were used to receiving caravans of many thousands of people from the east on a rather frequent basis. Once you understand who these Wise Men really were, the biblical question is answered. Also, what was the “star” that led the Wise Men from Parthia all the way to an actual physical home inside which they found the young child, Jesus? How could any heavenly object in the skies above the Holy Land identify one individual child who was inside a house (verse 11)? Obviously, no such thing could have occurred.

The answers to the above questions are all given in my above-cited books; however, I have below what I hope readers will receive as my gift to them. It is a link to a PDF of the entire first third of the ninth chapter of my E-book, The “Lost” Ten Tribes of Israel…Found! This portion of my book examines the birth of Jesus Christ, the arrival of the Wise Men, the nature of the “star” that guided them, why the entire city of Jerusalem became frightened when the Wise Men arrived there, etc. I think you will appreciate the biblical accounts about Jesus Christ’s birth at a much deeper level when you combine pertinent secular historical accounts with the scriptural narratives to understand the entire story of what Matthew 2 records for its readers.

I hope that the information will be enlightening and interesting to you, and I trust that it will boost your faith in the accuracy of the scriptural accounts about the many events that occurred at and just after the birth of Jesus Christ. The endnote numbers in the cited text refer to historical sources that are listed in my actual book.

Author – "The Lost Tribes of Israel"

After a career-ending injury, the author directed his research skills to a comparison of secular historical records with the historical accounts of the Bible. This led to the publication of his first book, The "Lost" Ten Tribes of Israel... Found!